Changes to earth’s systems are a growing threat to human health. These changes include worsening air pollution, which kills some 7 million people each year, and climate change, which exposed 157 million more people to heatwaves in 2017 than in 2000. Another critical change in earth’s systems is the loss of biodiversity – the variety of life on earth. 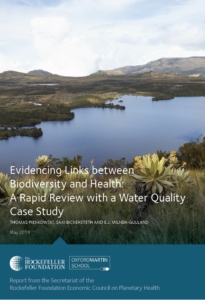 In our recently released report, Evidencing Links between Biodiversity and Health, we synthesised research connecting health to biodiversity using a water quality example. We found strong evidence that biodiversity sustains ecosystem processes, as well as plausible mechanisms through which biodiversity can enhance water quality. Our review also restated the importance of water quality to the health of vulnerable populations, such as the 159 million people exposed to illness through their dependence on surface water. With these points in mind, making the case that biodiversity influences health through its positive effect on water quality is conceptually straightforward.

Yet, we find few empirical estimates connecting these two bodies of research. A key question remains: what quantifiable effect does biodiversity loss have on health through water quality? What is the scale of this effect compared to other watershed factors, such as land use? Our review was limited in depth and scope and only focused on the example of water quality. Nevertheless, similar or greater levels of uncertainty are likely to exist for other proposed mechanisms connecting biodiversity and health.

If biodiversity loss is to be taken seriously as a public health and development issue, we need to provide convincing estimates of the disease burden associated with it. We also need to show how biodiversity protection can provide similar benefits compared to established public health interventions. For example, The Nature Conservancy estimates that the cost of watershed conservation (but not biodiversity protection specifically) would be offset by municipal water treatment savings in one-in-six sampled cities globally.

Part of the challenge of communicating research in this area is that the term biodiversity – diversity at a species, genetic, or functional level – is sometimes misused to mean habitat, nature or wildlife. This obscures the role of biodiversity in human health, and ultimately, how natural landscapes should be managed for health.

In some instances, we may not have empirical estimates of biodiversity-health links, but there may exist a strong conceptual case coupled with a potentially high cost of inaction. In these cases, we should explicitly recognise this uncertainty while advocating for precautionary and no-regrets approaches. Nevertheless, policy-makers would benefit from empirical evidence when deciding if biodiversity conservation is a sensible public health strategy.

Although biodiversity loss is a major global concern, if we wish to use public health benefits as an argument for conservation, we must provide the right evidence supporting this claim.

By Thomas Pienkowski, Department of Zoology, University of Oxford.